The Power of Delta's In2ition Shower 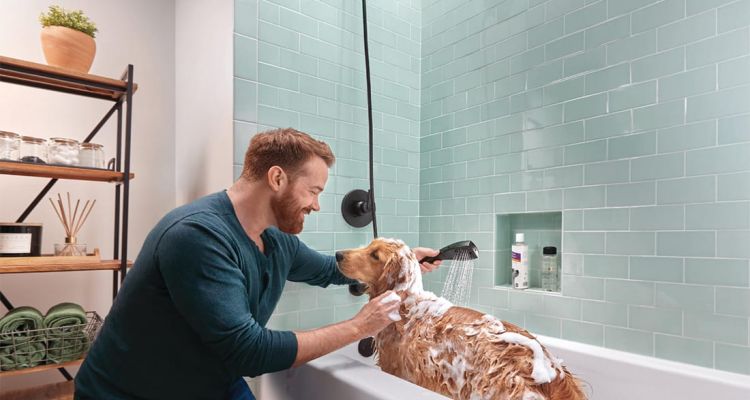 The shower has always been used for more than just bathing. It can be a relaxing getaway from a stressful day. A place to rinse off the dog after a playful run around a muddy yard. A one-stop shop to scrub down a messy kid. While all these tasks can be a challenge to do with a normal shower head, Delta’s patented In2ition detachable shower head makes it a breeze. Since the hand shower nests inside the shower head, you can use it as a traditional shower. By removing the hand shower, you can receive the benefit of being able to target specific areas. Finally, the combination shower head and hand shower gives the benefit of both models flowing at the same time. The power and versatility of Delta’s In2ition Two-In-One Shower really is unmatched.

The ideal DIY project is one that can be done by yourself and quickly make an impact. Many think you have to get a professional involved to have a luxury shower when, in reality, it is as easy as swapping out an old shower head for the In2ition. Just like its name, the In2ition is easy to use and, more importantly, easy to install. Typically to get that level of functionality with a dual shower head, the entire shower would need to be renovated and redone with multiple water lines. With Delta’s In2ition shower, the previous shower head is simply swapped out and you get the functionality of two products with just one. With minimal tools, it can easily be installed in under 20 minutes and the shower experience is instantly improved. “All you have to do is twist the showerhead off and twist one on, says Kelsey Kinniry, Associate Brand Manager at Delta. “The hardest part is twisting off your old showerhead.” With Delta’s patent, the competitive offering is relegated to separate positioning of the hand shower and shower head to offer more of an older-school/traditional combination shower.  While these do exist in Delta’s assortment of products too, the In2ition provides all the functionality in a concise footprint with intuitive features.

The utility you reach for. The daily escape you live for.

Cleaning is a chore. But with the In2ition, cleaning becomes much easier. Using the handheld shower head helps with anything from watering plants to washing car mats, and then washing the shower down after. “The two-in-one makes it easier to clean yourself and the shower, says Kinniry. “That’s why I put it in my shower.”

On the flip side, the In2ition can also help create a relaxing shower experience by using the handheld shower to rinse out shampoo or having full-body water coverage from the dual heads. Overall, this product is a must-have to make life easier and more relaxing.

No matter what the Delta In2ition is used for, it will add ease to everyday life. “It’s not just how it looks,” says Kinniry. “But the whole experience as well.” Through purposeful and intentional innovation, anyone with a minimal DIY skill set can quickly upgrade their shower into a multi-functional space.